This sculpture is part of “A Bad Idea Seems Good Again,” Alison Ruttan’s ongoing investigation into the visual evidence of war and the damage inflicted on communities, begun in 2010. It was part of a recent exhibition at the Chicago Cultural Center.

Each hand built clay slab construction depicts a specific building bombed in recent conflicts, such as in – in Homs, Aleppo, Baghdad, and here, Beirut. Based on photographic documentation and new sources, the series archives evidence that will soon be buried, bulldozed and carted away as new cities are built a top them.

Ruttan notes that while they may look similar to the effects of natural disasters it is important to remember that these are not accidents of nature but entirely man made acts of destruction. She also points out that while the subject of this work focuses on the destruction caused by war, specifically the damage that civilians endure, it is equally impossible to ignore how strange and interesting these images of destroyed cities are. Modernity's presence can be seen in the gridded structures revealed in the destruction as well as the directional movements within the collapses themselves. It is possible to see this work as a reflection on a failure in modernism, a failure to transform the Middle East into an image of ourselves.

Ruttan is a project-based artist who blends documentary and research practices with subjective interpretation across a wide range of media. Questions relating to human nature circle all of her projects. "How far can you pare down visual stimulus and still have a sexual response?", "How much of our behavior is rooted in the core of our biological identity and how captive are we to these impulses?", "Why are we attracted to looking at violence?", " Can we evolve out of endless cycles of war and conflict?"

Ruttan offers a space in which to examine conflicting responses that may or may not be resolvable by the viewer, ultimately asserting we live in a "paradoxical nature of being" in which negotiating that condition is the true state of human nature. 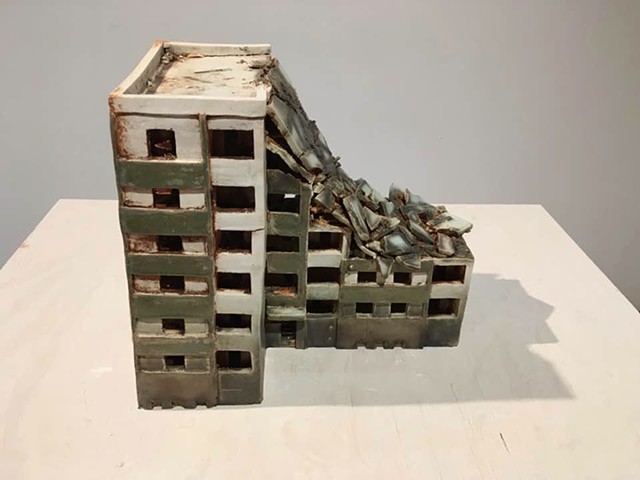