Michael Rakowitz launched Spoils in September 2011, a “culinary intervention” presented by Creative Time, in collaboration with Chef Kevin Lasko at Park Avenue Autumn in New York City. It was a meal of venison atop Iraqi date syrup and tahini (debes wa’rashi), and served on plates looted from Saddam Hussein’s palaces. The event was covered in several media outlets.

The dishware had been looted after Saddam’s palaces were destroyed by Coalition Forces. Personal household items such as plates and silverware were taken by Iraqi citizens, many of whom used them in their own homes—a dispersal of power. The plates were purchased on eBay from two different sources: an active American soldier serving in the same unit that captured Saddam Hussein—and an Iraqi refugee now living in Michigan.

Rakowitz received a Cease and Desist letter demanding the “surrender of the Iraqi plates to the U.S. Attorney's office, Southern District of New York.”

On December 11, 2011, at the request of Iraqi Prime Minister Nouri al-Maliki and at the behest of US President Barack Obama, Saddam Hussein's dishes were repatriated to the Republic of Iraq during the meeting in Washington, D.C. to finalize plans for American withdrawal from Iraq and transfer of sovereignty. The plates traveled back to Baghdad on the same flight as the Iraqi Prime Minister.

Reports on the project's conclusion accompanied reports on the end of the Iraq War by various news outlets, including The New York Times, The Rachel Maddow Show.

Michael Rakowitz’s work often deals with Iraq, the country his grandparents fled in 1946. Over the years, he has re-opened his grandfather’s import/export business, remade artifacts stolen from the Iraqi National Museum, opened the first Iraqi-Jewish restaurant in the Arab world, staged an homage to the Beatles’ farewell concert on a roof in Jerusalem, and drawn parallels between genocide and gentrification in Chicago and Iraq. His current project is A Desert Home Companion, a participatory performance and radio project involving American veterans from the Iraq War and the Iraqi refugee community, commissioned by the Philadelphia Mural Arts Program. Rakowitz is on faculty at Northwestern University and represented by Rhona Hoffman Gallery. 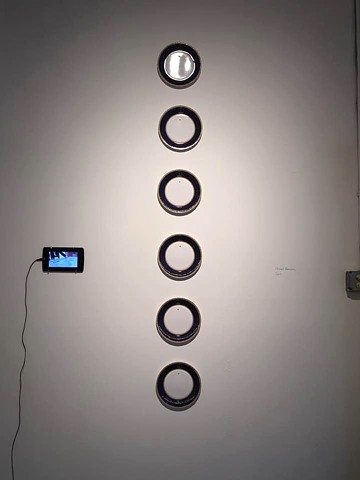