Trained in miniature painting in her native Pakistan, Chishty is inspired by the vibrancy of Pakistani truck art, which applies similar highly colored patterns to ordinary vehicles, but with the recognition of the tragedy of drone strikes that use unmanned vehicles to execute enemies without notice or trial. Often, civilians are victims too.

“The buzz of a distant propeller is a constant reminder of imminent death,” writes David Rhode in The Drone War. The authors of the Stanford-NYU human rights report, Living Under Drones, which is so far the most comprehensive report on the civilian impact of drone warfare, found that the sound of drones has a profound impact on the mental health of civilians.

Chishty’s upcoming project is “Naming the Dead”, an audio piece in which she asks American citizens to say the name of a Pakistani civilian of the same age and gender, who was a victim of a drone strike. Gathering data from the Bureau of Investigative Journalism website, her current list contains 354 names including two females and several children.

Chishty has a solo exhibition at the Imperial War Museum in London in fall, 2016. She recently joined the faculty at Kent State University. 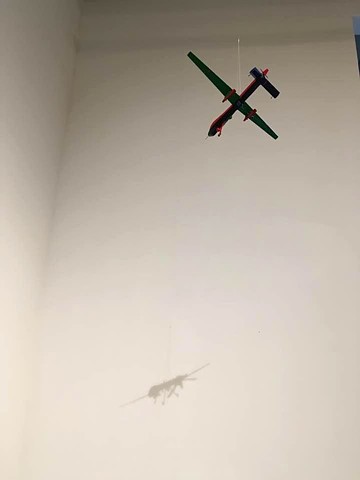