Twin Towers- Tribute Rug Carpet-9/11 2001- USA History
2011
After the attacks of 9/11, and the US invasion of Afghanistan, a new type of war rug appeared in bazaars. It didn't reference historic patterns as much as the Soviet-era war rugs. Instead it drew from images in the media and Coalition propaganda. The rugs depicted the jets crashing into the Twin Towers of the World Trade Center, aircraft carriers with jets taking off, and the harmonious continuum of the US flag and the flag of Afghanistan, united by a dove of peace.

It's title is its Ebay listing description. Read my blog post about this carpet.
PREV / NEXT   33 / 38
BACK TO TWIN TOWERS- TRIB... 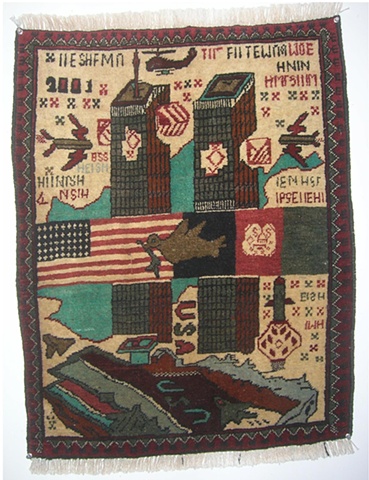